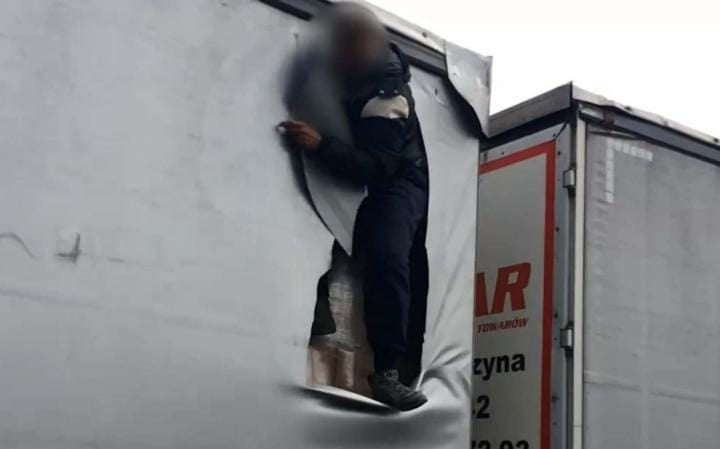 A suspected illegal immigrant has been filmed cutting himself free from the back of a Polish lorry in north London rush-hour traffic, before running off. Witnesses said the man, of Middle Eastern appearance, used a Stanley knife-style blade to slash open a hole in the heavy-duty canvas of the rear container, while the driver remained unaware of his actions.

Footage shows the brazen escape take place on the A1 Watford Way between Edgware and Mill Hill during rush-hour traffic. The shaven-headed man, who appeared to be sitting on a pile of wooden pallets, wriggled out of the hole before lowering himself from the lorry and apparently running off across the dual carriageway.

Jay Baker, a 24-year-old glazier who watched the drama unfold, said: “We couldn’t believe what he was trying to do. I think he wanted to jump onto our van. “We were shouting at the driver: ‘There’s a bloke in the back’, but I don’t think the lorry driver spoke English so he didn’t understand what we were on about. “The guy must have had a Stanley or something because he’d cut right through the canvas and was looking to leg it.

“We kept screaming at the driver, but just couldn’t get his attention. There were loads of people watching and as I was the passenger in the van, I took a video. “Eventually we overtook it and gave up shouting. That’s when he jumped out and just legged it across the road. We never saw him again after that. “I don’t think the lorry driver had a clue what was going on. He didn’t seem to know there was anyone in his wagon. Presumably the guy had sneaked on. “I’m guessing he must have been an illegal immigrant. No one else rides in the back of lorries and then runs away.”

At one point in the 90-second clip, which has been viewed more than 56,000 times online, Mr Baker can be heard asking: “Oi, where are you going?” The lorry carried the name of Polish transport and logistics company Rencar, based in Nadarzyn, near Warsaw.

The firm did not respond to requests for a comment. Mr Baker, a father-of-one from Watford, Hertfordshire, said: “He just jumped over the central reservation and sprinted into the distance.

“Who knows where he is now? I’ve seen all sorts driving around on jobs but I’ve never seen a man cut himself out of a lorry. “It was just an ordinary day until then, but then I put the video online and it’s just gone crazy.” The Metropolitan Police said it has received no reports about the incident.