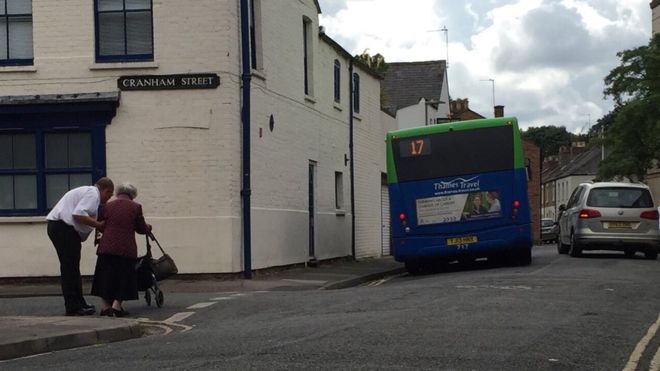 A bus driver has become a local celebrity after a picture of him helping an elderly lady to cross a road was published online.

Mark Adams was spotted parking his bus in the Jericho area of Oxford to help a 90-year-old lady called Maureen. His act of kindness was captured by a builder using his smartphone and sent to the bus company.

The driver, from Wallingford, said his act of kindness was something he did for people every day.

The 54-year-old, who has been a bus driver for 30 years, said bus services provided a lifeline for the elderly and he would “run all services for free if I was a millionaire”.

“I saw Maureen looking confused standing on the corner of the street as I was driving my bus,” he said.

“I had seen her before and knew she was on her way to do some shopping, so I pulled over and helped her to cross. “I made sure I was able to pick her up on the way back to make sure she got home.”

Keith O’Connor caught the moment on Tuesday and sent his photograph to the Thames Travel bus company, for whom Mr Adams works.

The story has now been published in local and national newspaper websites. The modest driver said there were “thousands of bus drivers like me”.

“There are so many old ladies in this area who rely on the bus for their independence,” he said. “It doesn’t take much to be helpful.”