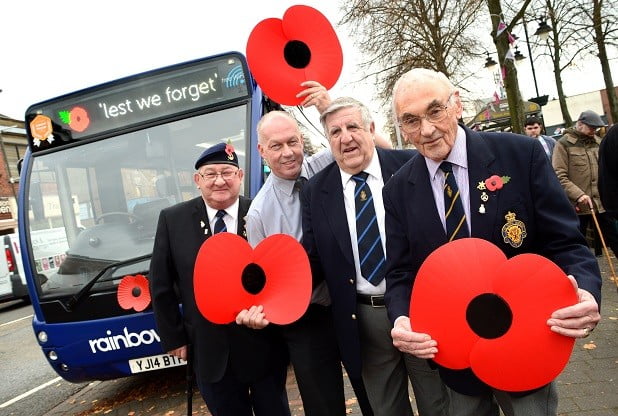 Two bus companies are paying tribute to those who have served in the Forces by having their coaches wear poppies.

Stagecoach East Midlands and Trentbarton are holding a series of fundraising initiatives in the run-up to Remembrance Day.

The company is also raising money for the Royal British Legion through a ‘Tweet your Hero’ Twitter campaign, which will ask followers to tweet about a hero in their life, past or present.

Finally, Stagecoach has a ‘Poppy Bus’ running on services across the region all year round as a visual tribute to the millions of men and women who have served and continue to serve with our armed forces in past and present conflicts. Poppies and wooden crosses appear along the sides of the bus, which also include memorial messages and a ‘Remembering Our Heroes’ headline.

Trentbarton has also donated £800 to The Royal British Legion’s annual Poppy Appeal and more than 100 of its buses and coaches are also donning a poppy in tribute to those men and women who have served their country.

Jordan Kemp, marketing and communications manager at Trentbarton, said: “The Poppy Appeal plays a key role helping people and organisations to remember the sacrifices made by members of the British armed forces, past and present.