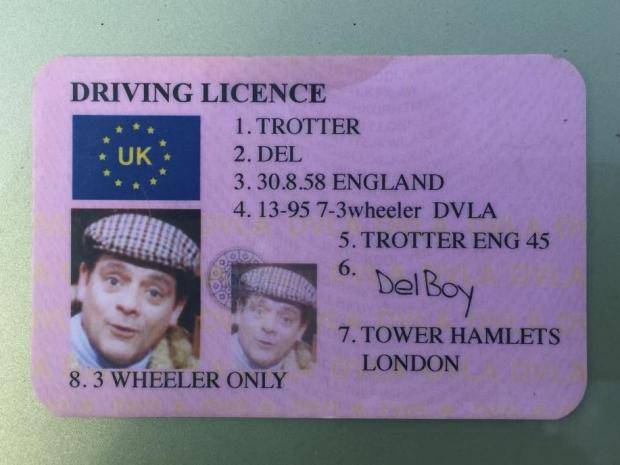 Recently, the Police officers from Norfolk constabulary’s dog unit stopped a green-coloured Renault Megane on the A47 at Terrington St John. Little did they know that they were in for a surprise.

Apparently, a man in his 20’s was driving without insurance or a driving license. Police were however astonished to see his fake license which was themed as the popular 1980’s BBC sitcom ‘Only Fools and Horses’. The details on the license were of the lead character Derek Edward Del Boy Trotter. This character was played by the actor David Jason. Therefore, the picture on the license was of David Jason, wearing a chirpy flat cap. The license holder’s signatures were of ‘Del Boy’.

In the documents, the famous character’s date of birth was stated as 30th August 1958. It also mentioned that the license holder was only allowed to drive a ‘three-wheel’ vehicle. This idea was also based on the sitcom in which Del Boy owns a three-wheeler. However, Instead of Peckham, in South London, where the sitcom character resides the address on this license was of Tower Hamlets, London.

The police stated that the fake license was considered to be a joke. It was not taken as an attempt to deceive anyone or to steal anyone’s identity. However, the fact that the person was driving without a license or insurance was considered to be an offence. As a result, he was called to appear in court at an appropriate time. The officers at Norfolk Constabulary tweeted that even this #Plonkers fake driving license could not stop his car from getting seized.

The incident occurred on Wednesday, 21st of March, 2018. This was a week after a motorist in Milton Keynes tried to fool the police with a fake Homer Simpson driving license.