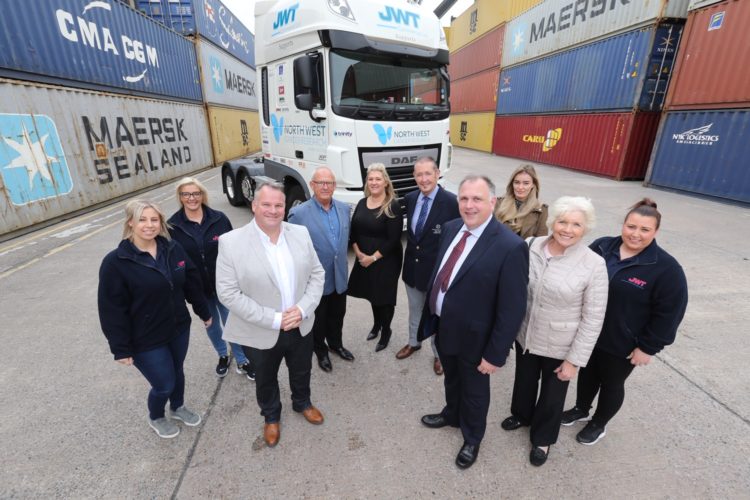 A Merseyside haulage firm has sent a ‘charity truck’ around the UK, raising money for a cancer research charity, covering some 80,000 miles.

Owners of Bootle-based JWT Commercial, Jonathan Whitely and Tom Gallagher, went on a fundraising drive for Liverpool-based charity, North West Cancer Research (NWCR) which has raised millions of pounds to aid in the battle against cancer.

An employee’s idea led to 16 companies donating to have their logo displayed on the side of the lorry as it drove around the country, raising money as it covered the huge distance. The effort raised some £5,500 for the charity and was recognised at the 70th anniversary awards ceremony of the NWCR, earning JWT the Corporate Support Award.

Mr Whiteley said: “We are all very grateful to have been selected for this award. Every day, our trucks travel hundreds of miles across the UK and last year we had the idea to use on to raise money for cancer research.

As we are a Merseyside-based business, when we heard about the ground-breaking work North West Cancer Research has done in the region, we knew it was our charity of coice and we hope to be able to continue supporting the charity in the future.”

A gala dinner was held last weekend to honour efforts of life-long fundraisers and researchers, who have helped the organisation to become one of the leading independent research charities in the region.

In the last 10 years, the charity has supported some £39m worth of research in the North West, which support ground-breaking research projects at the University of Liverpool, Lancaster University and Bangor University.