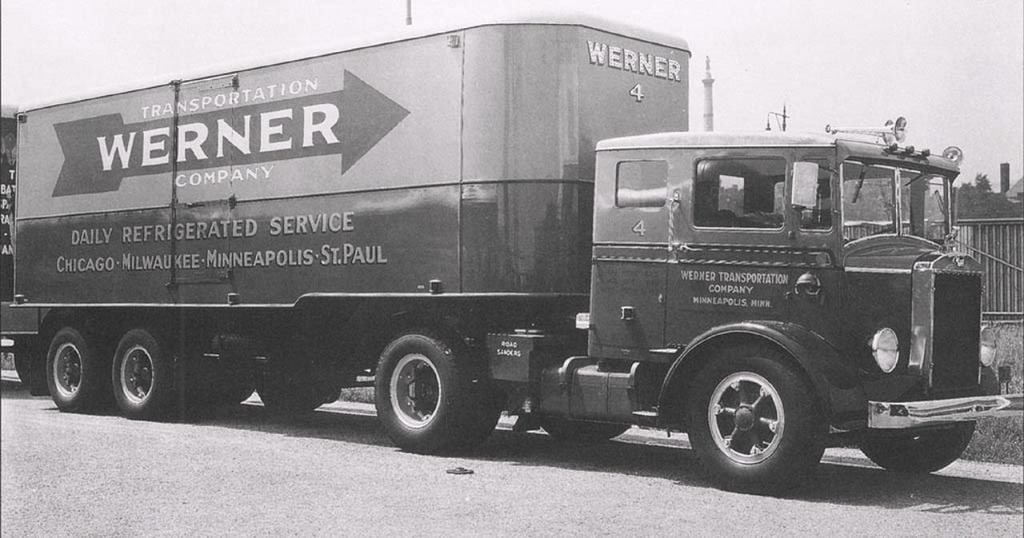 A Brief History of Trucking

The trucking industry has affected the political and economical history in the 20th century.

Before the introduction of automobiles, the majority of freight would have been transported by train or horse-drawn wagons.

In the early 1899s, trucks were basically motorised wagons that very closely resembled the horse-drawn carriages that preceded them. They did not have noses in front of the cab and the motor and machinery was simply suspended below the driver’s seat. Paved roads were rare – and trips were made with solid rubber tires which made for a very rough and slow journey. 1920 saw the introduction of pneumatic (air Fill) tires that we are familiar with today, allowing for a much easier ride and allowing trucks to travel at higher speeds.

There were about 10,000 trucks in the whole country in 1912 – with many of these used for deliveries in and around the larger metropolitan areas. The Settle Chamber of Commerce sponsored a truck and driver to travel from Seattle to New York City in 1916. This showed the manufacturers and merchants of the country that highways and truck transport were going to become a major influence in their lives. The trip from Seattle to New York City took a grand total of 31 days!

As trucks became more practical and availability increased, the rail gradually began to lose business to trucking companies. With the regulatory environment, the rail was usually less expensive for carrying freight – but service by truck was much better for timing.

In 1912, trucks were equipment with lights to allow them to be driven at night and make up travel time that was previously spent sleeping. The fifth wheel innovation came in the 1920’s, greatly enhancing the speed with which loads could be picked up and dropped off. Durin this time, the semi-trailer was becoming more popular and this innovation made a huge impact on the way that freight and cargo was transported.

There was less than 15, 000 miles of paved roads throughout the US in 1914, but during the next decade, the federal government spent $75 million on new road construction along with improving existing roadways.

Trucks were first used extensively by the military during World War I. With increased construction of paved roads, trucking began to achieve a significant foothold in the 1930s – and soon became subject to various government regulations (such as hours of service) During the 50s and 60ss, trucking saw even more of a boost with the construction of the Interstate Highway System, an extensive network of freeways linking major cities across the continent. At this time, diesel fuel was a whopping 14.9 cents a gallon! Quite a difference from today’s fuel costs. Trucks with refrigerated trailers ran these on propane which made an additional fill up necessary to keep frozen items cool.

Trucking came to the public eye in the USA in the 60s and 70s when songs and movies about truck driving were major hits. Drivers took part in widespread strikes against the rising cost of fuel during the energy crises of 73 and 79 – and the industry was drastically deregulated by the Motor Carrier Act of 1980.

Trucking has come to dominate the frieight industry in the latter part of the 20th century, alongside “big-box stores” such as Wal-Mart and Target.