HomeCut Your Costs with Solar Panels Fitted to Your Fleet 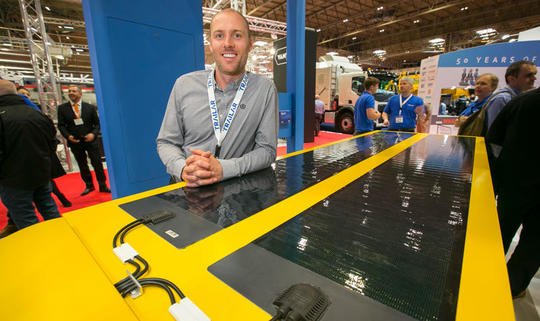 Cut Your Costs with Solar Panels Fitted to Your Fleet

Would you like to cut down on your fuel consumption by up to 5% with a device that can be easily fitted and then forgotten about?

Starting as a management development project at DHL Supply Chain, Tralar was born from managers looking at the fitting of solar panels on domestic homes and researching whether a similar project could be undertaken on trucks. This task led them to Southern California and the manufacturer of an ultra-thin and flexible solar film that can be applied to the roofs of trucks and trailers – maintenance free for the life of the vehicle.

Trailar MD Aaron Thomas said: “We fitted it to six rigid trucks and six trailers to test the product. At Millbrook we found it could cut fuel consumption by 5% on rigids, and up to 2.5% on an artic. We have already sold 500 units, and we want to sell 2,000 this year and maybe 5,000 next year.”

The system uses a charge controller to monitor power produced by the solar panels and reduce the electrical drain and the drag on the truck engine from the alternator.

With so many systems on modern trucks, driven electronically rather than by belts the power saving with the use of these solar panels is significant. Fort artics, two batteries are installed on the trailer and charged b the panels. This makes the trailer self-sufficient in electrical power so it does not even need to be connected to the tractor unit.