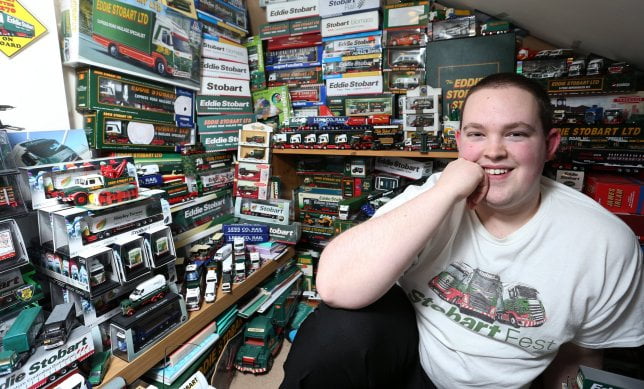 James Bonnett, aged 24, has collected over 300 model trucks and other assorted memorabilia related to the haulage legend with his collection costing over £11,000 to date.

His long-running obsession has seen him lose several girlfriends, but he has since found himself a new like-minded partner, and the two celebrate Valentine’s Day with a touch of “Stobart Spotting”

His stop-animation films of his model motors have amassed 1,000 followers online and the Co-op baker is working towards making his dream a reality by working towards leaving his job and becoming a full-time lorry driver

“I was about seven or eight when I first got interested in the trucks. It was the paintwork that made them stand out to me, so I contacted my local paper to see if there was a fan club and joined up. I met Edward Stobart at the Peterborough Truck festival in 1999 which made my love for them grow even more. They really are the crème-de-la-crème of trucks. There’s a new model every three years and they’re so much better looked after than the other fleets.

James does try to limit his spending to £200-a-month on models, and believes he now has the largest collection. On average the larger trucks cost £80 with the smaller models costing around £20. James said “There is a guy in Wales who has a similar sized collection to me – but I think mine is bigger! Most of mine are in boxes, and his aren’t, everyone who sees my collection say they’ve never seen one as big.”

A brio truck from James’ childhood was recently valued at a whopping £800, and his collection as a whole has a combined value of well over £10,000.

James lives with his mum, Jane, and her partner Ian Maylor, said his collection really took off after a previous relationship ended because of the hobby. “I had a girlfriend who didn’t like me spotting, she wanted me to spend all my money on her instead of doing what I wanted to do. I was saying you are not going to stop me doing my hobby. It was a factor that contributed to the break-up but because I’d saved so much money during that time, after it ended in 2012 my collection really began to rocket. I only had about 100 trucks then, but now I’ve got well over 300. We all need our hobbies and I’ve got a few. I’ve got model building, collecting models and going out spotting.”

James is currently training to get a HGV licence and will get behind the wheel of a real truck for the first time next month.

“I’m a bit nervous, but it will lead the way for me to drive for Stobart eventually. That’s what I want to do.”

Aside from spotting, James also runs a Stobart Facebook group and uploads stop-animation video stories of his model trucks to YouTube, attracting some 890 subscribers. The videos only last one minute, but each second of film requires 4 pictures and the stories take hours of painstaking work to complete.

Current girlfriend, Rebecca Stirland, shares his passion and the pair regularly go out spotting. Rebecca, who owned a Stobart model truck before meeting James, said: “I laughed and thought it was strange at first. It’s the last thing I would imagine having in common – but we do now. We went to Doncaster spotting on our first Valentine’s. It was my idea. He’d booked the weekend off and we were going out for a meal Saturday night and I asked if he wanted to go.”

“Steady” Eddie Stobart starting the agricultural firm in the 50s, which expanded int haulage by the 70s.

Stobart Club membership costs £18-a-year, and the firm sells a wide range of merchandise, including onesies, fridge magnets and teddy bears online. A spokesman said: “We’re very proud of our following and honored that there’s such an interest out there in our business and in our fleet.”