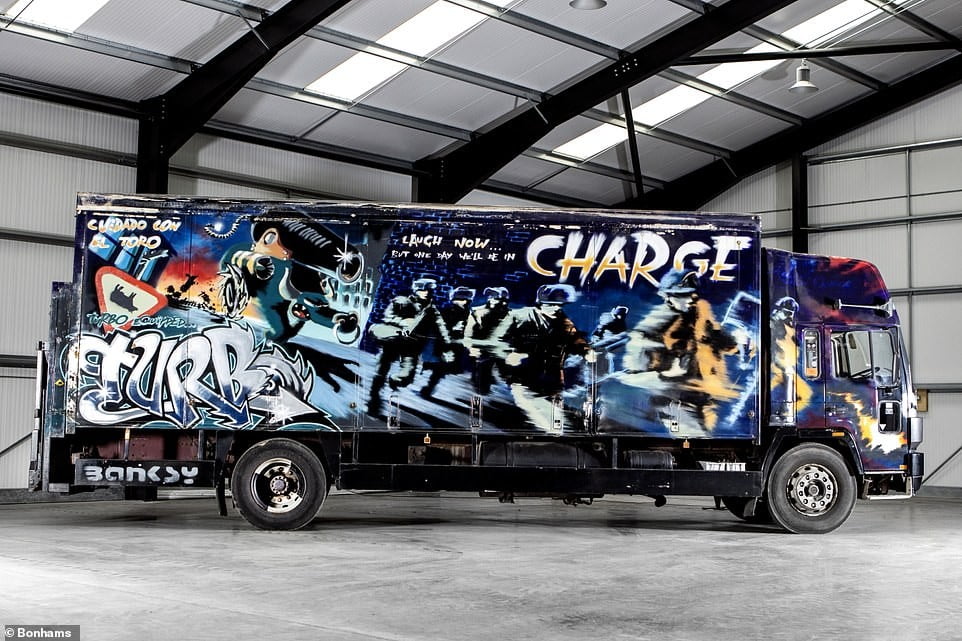 A truck which has been covered in graffiti by Banksy were tipped to go for over £1.5 million at auction as collectors from over the world are set to battle out for the acclaimed piece of art when it went under the hammer on 14th September 2019.

The anonymous street artist had decorated the vehicle back in 2,000 at a millennium party in Spain, after being presented it by an international circus company. He then completed the large mural titled Turbo Zone Truck (Laugh Now But One Day We’ll Be In Charge) by hand over two weeks.

The truck was then used for years as the company’s transport around Europe and South America.

Believed to be one of Banksy’s largest pieces it depicts a man smashing a TV using a large hammer.

The 17 ton truck is also adorned with features such as flying monkeys and soldiers running away from a cannon. The truck has been signed twice by Banksy and includes a certificate of authenticity.

The piece will go for auction at Goodwood Revival, a three day event held in Chichester, West Sussex.

Ralph Taylor, global head of post-war and contemporary art at Bonhams, said, “Banksy is arguably the most important artist to have emerged since the millennium and this, his largest commercial work, represents a new high watermark of quality for works of his to appear at auction. The composition bears all the hallmarks of this peerless agent provocateur. Bonhams is thrilled to have the opportunity to continue offering the best of his work at auction as we have done consistently for well over a decade.”

Last year, Banksy caused headlines when he shredded his Girl With Balloon print immediately after it was sold at auction.

Onlookers were left stunned when the piece was cut into several pieces when it was bought by a European art collector for £1.04million – but it is now thought it could be worth far more than in it’s original state.