HomeNew Toxicity Charge to Be Introduced 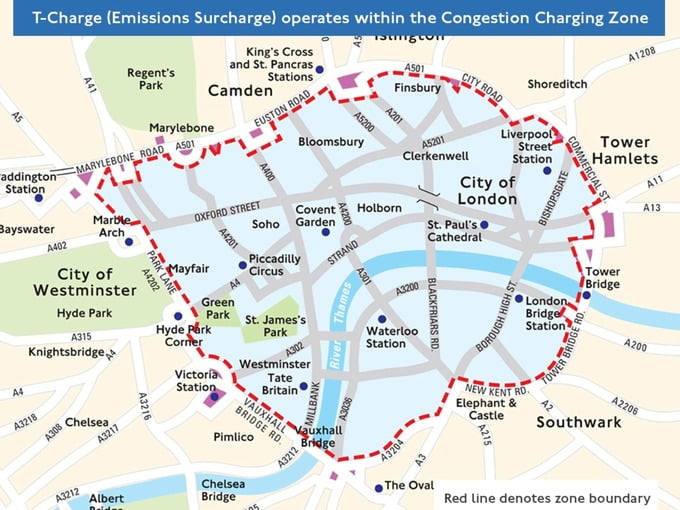 New Toxicity Charge to Be Introduced

As a part of his plan to tackle the air quality problem of the capital, the Mayor of London, Sadiq Khan recently introduced an Emissions surcharge (also called a Toxicity Charge, or a T-Charge).

From 23rd of October, 2017, all vehicles which don’t meet the Euro 4 emission standard will be subject to a £10 fee to enter the congestion charge zone of central London. These would include cars, minibuses, buses, coaches, HGVs and typically all those diesel and petrol vehicles which were registered before 2006. A free online tool has been made available on Transport for London’s website which allows motorists to check if their vehicle will be affected by the T-Charge.

Read more about the T-Charge here

10,000 of the oldest, most polluting vehicles are expected to be affected by this. The mayor said that due to toxic air, our children are growing up with lungs problems. He stressed that to battle pollution, the time for action is now. Currently, an alarming number of 9,000 Londoners die prematurely each year due to long-term exposure to toxic air. 438 schools in the capital city are in areas which exceed legal air quality levels. According to the mayor, this was a much-needed step to protect the health of our families in the future.

The introduction of T-Charge comes ahead of the mayor’s plans to introduce the world’s first Ultra Low Emission Zone by 2019. Sadiq Khan has doubled the funding for overcoming the air pollution problem by setting aside £875 over the next five years. He is also spending over £300 by gradually replacing the double-deck diesel buses by hybrid or zero-emission double-decker buses.

This measure is expected to not only relieve pressure on London’s transport system but will also ensure people living and working in the city can enjoy a cleaner air and a better health.