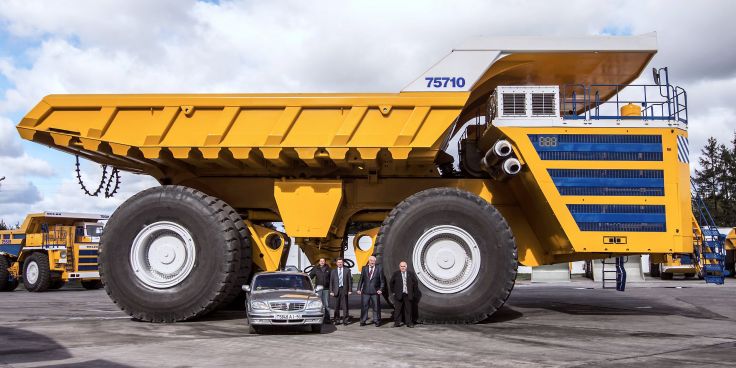 To help bring down the cost of mining natural resources, Belaz, a state-owned company of the former Soviet Republic of Belarus has manufactured a massive dumptruck. With an engine six times as powerful as a Formula 1 racing car, length equal to two double decker buses, and weight more than that of a fully loaded Airbus A380, the Belaz 75710 is definitely one of its kind. It is considered to be the biggest dumptruck ever, in the world.

The dumptruck is being used to shift rocks at a coal mine in Siberia. Having a hauling capacity of 450 tonnes, it can easily carry 87 tonnes more load than the previous record holder.

Some of the special design features include 8 wheels compared to the conventional 6 wheels in pairs of two’s. These tubeless pneumatic tyres help it to carry the maximum load on top of the 350 tonnes of an empty truck. The Belaz 75710 is fitted with two 16-cylinder diesel engines. These can drive generators to run four electric motors and produce electricity. With a peak torque or turning power of 13,738 lb/ft (18,626Nm), it can start, stop and pull up hill heavy loads 24 times more powerfully than a Formula 1 car.

The dumptruck is capable of running on one engine when unloaded, to save fuel. It uses approximately 1,300 litres per 100 km. With an all-wheel drive feature, the Belaz 75710 can be driven to a repair centre even if one of the electric motors fails.

To make manoeuvring convenient, it has a turning radius of 65 ft. This is not much greater than that of a Belaz 360 truck, which the next-largest dumptruck, made by Belaz.

Two more Belaz 75710 are being made, which would cost over £3.84m. This enormous piece of engineering could prove to be a popular addition to the mining industry.