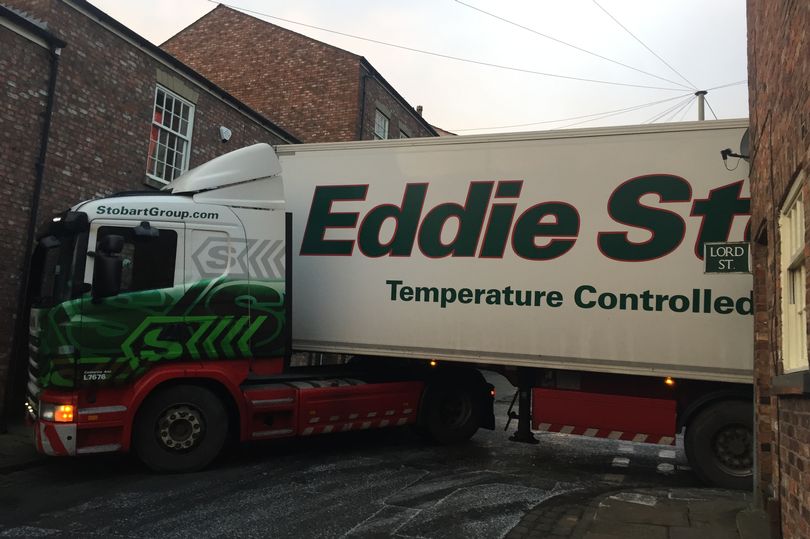 It was no ordinary morning for 39-year-old Billy Bamford, from Macclesfield, when he woke up to a huge Eddie Stobart HGV, trapped against his house. Around 8 am on Thursday, December 28, 2017, the HGV driver who was trying to turn left from Lord Street, on to Chapel Street, unfortunately, got the vehicle stuck. This caused a traffic chaos which took two hours to clear.

The startled homeowner Billy declared that he was woken up by two loud crashes and things falling off the wall. He added that the room behind the wall against which the HGV was stuck, belongs to his tenant. When the incident happened, she was asleep on a bed placed right next to the wall. The loud bang against the wall petrified her. Her first instinct was that it’s an earthquake.

Police arrived soon and had to close almost four roads and unscrew the homeowner’s satellite dish to help the HGV get back on to the road. It took almost two hours to completely clear the area and reopen the roads for normal traffic. As a result of this incident, the house wall got two long scratch marks. According to Billy the HGV firm has been very considerate since the incident and have apologised to him. A structural engineer would be visiting to assess the damage caused to the wall.

Billy and other local residents say that this junction has a known history of similar issues. Nine months before this incident, nine cars were smashed in the same area, by a relatively smaller truck. Residents suggested putting up a warning sign declaring it a No Entry road for HGVs and other large vehicles. Eddie Stobart’s spokesperson stated that they are aware of this incident and always take all such incidents very seriously. According to Cheshire Police, no one was hurt during this incident.