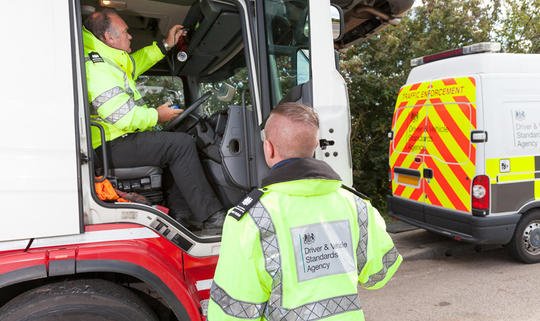 In a recent announcement made by DVSA, it was declared that drivers can be issued a fine for offences which occurred in the past 28 days. This rule became valid on the 1st of February 2018.

Offences such as breaking the drivers’ hours’ rules and the weekly rest rules come under this category. This law allows examiners to issue on-the-spot penalties of £300 for up to five driver’s hours offences which occurred during the stated time period. This could mean a massive fine of £1,500 for any driver who has breached the law in the past28 days.

This law is applicable to both local and foreign drivers. They can be fined for breaking driving laws in the UK and abroad. However, for foreign drivers, it gets tougher. Their vehicle will be immobilised and they won’t be allowed to continue with their journey unless they clear their fine.

According to the previous law, only UK HGV drivers could be fined for offences done on the same day. They could also be fined for drivers’ hours’ offences done in the past but the procedure was lengthy and hard to carry out. Foreign drivers, on the other hand, were not expected to report to hearings issued by the UK courts. Therefore, it was easy for them to breach the laws and get away without paying any penalty.

Another category of an offence covered by the new law is those HGV drivers who spend their weekly rest hours in unauthorised places where they cause a hazard to others. There have been a number of reports by residents, about noise and anti-social behaviour by these drivers. Also, according to the DVSA, spending the weekly rest in their cab does not count as a proper break. With the help of these laws, the DVSA hopes to take firm action against offenders. The Freight Transport Association (FTA) declared the law to charge non-UK drivers as a step in the right direction.

The law will be completely applicable in March when the 28-day period will be fully built up.