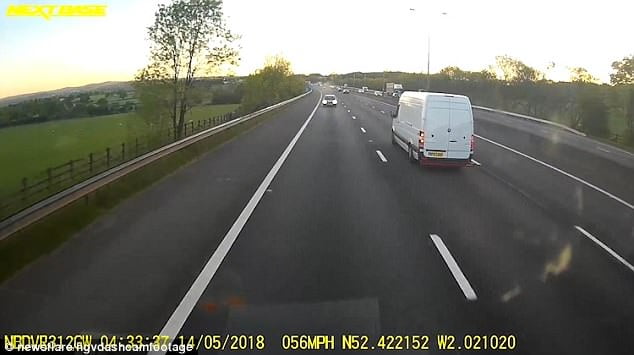 Dash cam footage caprtured on the 14th of May, on the M5 between junctions four and three shows the breath-taking moment a HGV driver realises what is happening and takes last minute action to avoid certain disaster.

The HGV driver was moving along the motoway, sticking to the first lane when a set of headlights appear in the distance. As they appear closer, it becomes clear that they belong to a hatchback which is heading straight towards the truck – on the right side of the motorway. Luckily the driver is able to move into the middle lane and avert disaster just seconds before there could have been a fatal crash.

Speaking after the incident, the driver said “Nothing quite prepared me for this level of stupidity.

“Even Still, I’m not sure whether or not this was a mistake on the driver’s behalf or if it was a deliberate act of dangerous driving. If I’d have blinked at the wrong time or wasn’t able to move into lane two it could have been a lot worse!”

The HGV driver spoke to West Midlands police and was told no action is being taken against the offending driver.

Watch the footage for yourself and let us know what you think of the scenario. Would you have been able to react as quickly as this HGV driver did? What would you have done? What do you think caused this incident exactly?