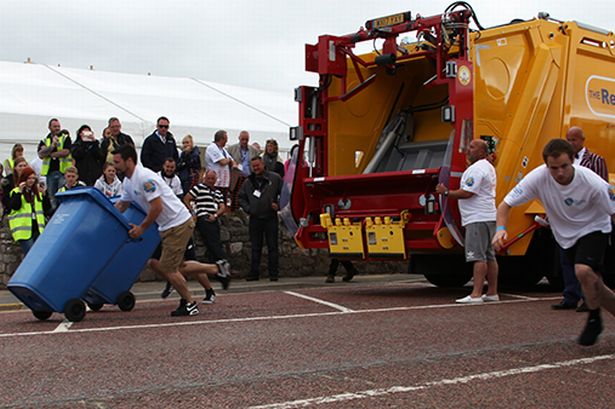 On the 16th of June, dozens of bin lorries from all over the country were vying to be crowned “Britain’s Finest Rubbish Collectors” at the event which ran all day in North Somerset.

Bin lorry drivers and loaders were locked in a race against the clock, filling wheelie bins with bags of sand before pushing them 50 metres to their waiting refuse vehicles, before repeating the process whilst the lorry moves gradually towards the finish line.

More than 30 teams of five people competed in heats throughout the day, culminating in a semi-final and a grand final to sift the champions from the rubbish as the winners and runners-up were decided in the thrilling contest. Founded by Spencer Law, the competition was held in Weston-super-Mare last year, and the organiser commented that “The races are very entertaining, free to watch and it’s very family-friendly with entertainment for the kids, everyone is welcome to come along and support the teams.”

Each year, the event is held to aise funds for the Alzheimer’s Society. Attendance is free, with a vast number of other attractions such as rides for young children, and concessions stands.

Laura Hewitt, a community fundraiser for the Alzheimer’s Society, stated that the charity was really excited to be involved in the unique and quirky tournament. She said “Last year’s event was a big success and this year it’s set to be a really fun day for both competitors and spectators. This is a really unique way to raise money for us as a charity and we’re thrilled that the organisers have chosen to unite with Alzheimer’s Society by choosing us as their chosen charity for the second year running.”

Could your team take home the title of Britain’s Greatest Rubbish Collectors?

If you feel the need to brush up on your skills ahead of next year’s event, give the HGV Training Network a call!