HomeVR Headset to be Used by Met Police to Show Cyclists How HGV Drivers Choose Not to See Them. 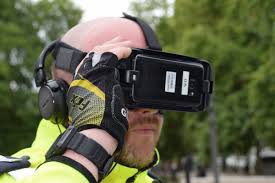 VR Headset to be Used by Met Police to Show Cyclists How HGV Drivers Choose Not to See Them.

The Metropolitan police have added a new tool to their ‘Exchanging Places’ programme – a new 360-degree film which shows how HGV drivers often don’t see cyclists, for example, by failing to properly adjust mirrors. The Met claim that this will “demonstrate how cyclists ought to safely position themselves when near HGVs.”

When it comes to such incidents, cyclists often feel the brunt of the blame with claimes they are “riding up inside the lorries”, but this pays little attention to HGV drivers who may overtake a cyclist, and put them in the “danger zone.”

The latest Met initiative invited cyclists and pedestrians to try on a 360-degree VR headset and then were shown a film shot from the perspective of a HGV driver.

The Department for Transport was heavily crtiicised for producing a safety video, showing a cyclist being “left-hooked” and crushed by a HGV at a junction last year. The video was accompanied with a caption saying “Don’t get caught between a lorry and a left turn. Hang back.” The video was slammed by cyclists, who claimed the video was just another example of “victim blaming.”

The 45-second advert featured a male cyclist undertaking an indicating HGV driver shortly before a junction. The film was poorly edited, with the HGV appearing to speed up before the junction, meaning at the speed the cyclist was going he should have been well past the HGV. Also, within this distance, the HGV driver should have made checks in his mirrors before carrying out the manoeuvre. In reality, both parties were at fault, but the video purely blamed cyclists. A direct editorial choice by the DFT, instead of showing both sides how both HGV drivers and cyclists get it wrong – they only showed a cyclist to be at fault.