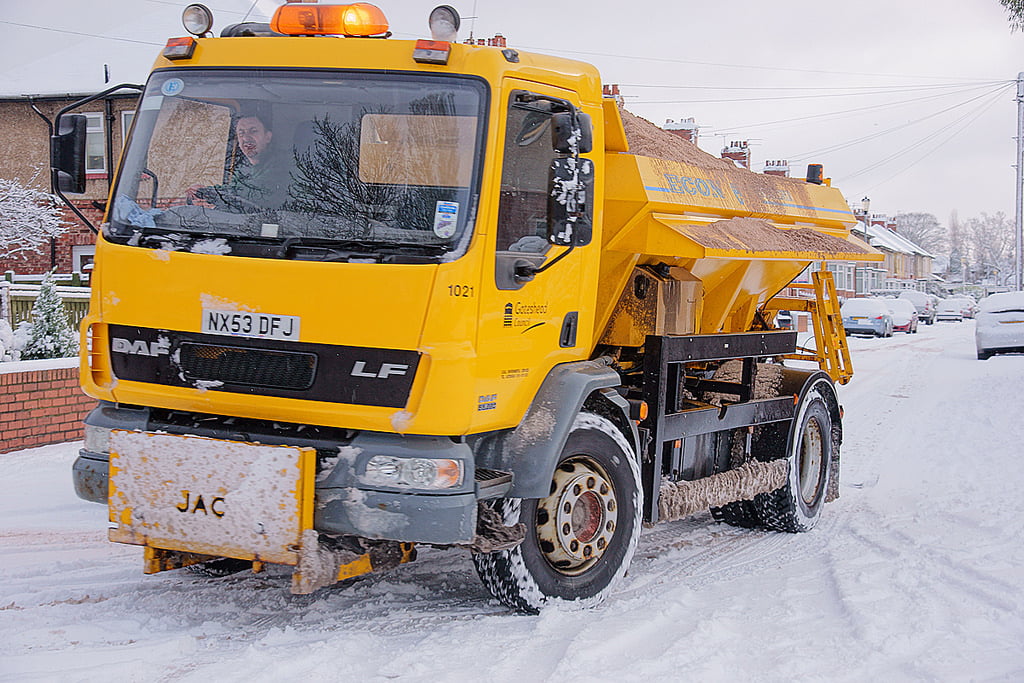 The Unsung Heroes of Winter – The Humble Gritter Lorry

When the winter hits in just a few months, the gritter lorries will once again be making their way across the UK, battling to make roads a safer place for determined motorists and to keep the country moving. A good indicator that the it’s about to get icy would be spotting these lorries doing their rounds. In Scotland, you can even track gritting lorries on a map to see if your area has been cleared yet. They even have amusingly named lorries, such as Gritty Gritty Bang Bang, Luke Snowalker and Gritty Gonzales – but why are gritting lorries so important, and who drives them anyway?

How Do Gritting Lorries Work?

Gritting lorries are quite simple – they deposit salt onto the road. Nothing added, just your standard garden variety salt. This salt is stored in a large hopper which makes up the back of the lorry. The lorries exits are protected by a fine mesh, protecting the salt and mechanism from being contaminated or blocked by foreign objects. A small motor pushes the salt through a tube, and an impeller (which looks a lot like a big dustpan) spreads it evenly over the roads surface. A time-consuming process – but worth it to ensure the safety of those using the roads.

Why do gritting lorries use salt? There are three reasons for this. One, is that the chemical composition of salt causes ice and snow to melt into water, and then absorbs the water. This means that ice or snow will be prevented from “sticking” to the surface of the road and making it unsafe for drivers. Secondly, salt is a rough and coarse material which provides a grippy surface for tyres on the road – reducing the chances of sliding and accidents. Finally, as salt is a naturally occurring substance it has no negative effect on the environment or wildlife that come into contact with it.

So who are the ones who are driving these lorries and keeping the country moving through adverse weather? It’s not a full-time just, but it is an essential one which often requires driving around the clock to make sure the roads are safe for the morning commute. With snow most likely between November and April, this is when most drivers will work. During the warmer weather, drivers usually take on other jobs. For example gritter drivers working for local authorities might work on motorways or bin lorries the rest of the year, only gritting when it is needed. The council aren’t the only ones, however, needing to prevent ice. Many private companies need gritting for parking spaces – these drivers often also drive delivery lorries.

Pay for gritter drivers can vary quite significantly – ranging from £10 an hour to £250 a night – depending on the company you are working for, the kind of vehicle driven and even the location. You will need a Cat C license to drive a gritter lorry. If you are interested in gaining a Cat C license, click here