HomeHGV Smashes into Railway Bridge and Gets Wedged in Tunnel 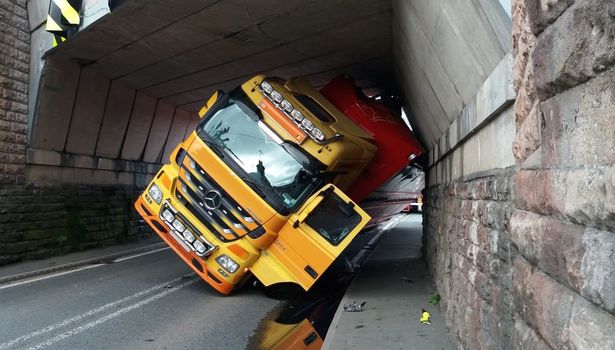 HGV Smashes into Railway Bridge and Gets Wedged in Tunnel

Network Rail have released CCTV footage showing the moment a HGV smashed into a low railway bridge, tipping on its side and getting wedged in a tunnel as part of a campaign urging drivers to “wise up”.

The HGV was eventually winched free by a crane, but the rescue brought trains to a halt. With as many as five “entirely avoidable incidents” like this one taking place a day, and costing the taxpayer as much as £23 million a year.

The campaign aims to highlight bridge sizes to drivers, with around 1,800 similar bridge strikes each year. Firefighters were on the scene, and the driver – who was not trapped, was handed over to paramedics although there weren’t thought to be any serious injuries.

Network Rail said it would be ‘pursuing a claim for costs’ through the haulage firm’s insurers.

“Dangerous incidents like this one at Tarporley cause huge inconvenience to train passengers and to motorists, not to mention the cost to the tax payer. The really galling thing is they’re all entirely avoidable. Roadside signage is provided to warn motorists on the height of our bridges.”

The collision resulted in a temporary halt on the Crewe-Chester line while a structural engineer checked the bridge for safety.

The most bashed bridge in the Greater Manchester area was the Ashton Road bridge in Bredbury, Stockport – being hit 46 times since 2009, closely followed by the Walkden Road Bridge in Walkden, Salford which has been hit 41.

Sir Peter Hendy, Network Rail chairman, added: “Size does matter when you’re a professional driver in a heavy vehicle. Not knowing the size of your vehicle or load could lead to a serious accident, and the loss of your licence.”