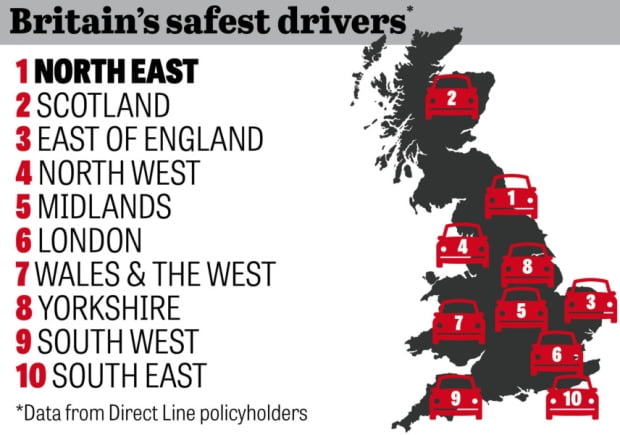 According to research conducted by one of the nation’s leading price comparison sites, MoneySuperMarket, 71% of British drivers believe that other road users could do more to improve their safety when driving.

The results also show that Scottish drivers tend to be the safest, with 51% of the population being accident free. Over half (52%) of Scottish drivers also passed their test at the first time of asking, when compared to the UK average of 45%.

The most unnerving driving situations for Scottish drivers were revealed to be: driving through severe weather (59%), driving at night (32%) and driving on the motorway (22%).

With in excess of 1,700 fatalities on the roads between September 2016 and September 2017 alone, MoneySuperMarket reveals how smarter driver technology can help cut costs and improve driver safety.

The research found that over half of drivers (55%) who did not pass their test first time, and those who passed after multiple attempts were more likely to go on and have more accidents. Those who took more than 5 attempts to pass were almost 1.5x more likely to have been involved in an accident than average.

Some smarter driving technology aids, such as reverse cameras, can help improve view of the road and driver spatial awareness – reducing accidents n the road, injuries or exterior damage which is made while parking or reversing. Despite the advantages of this technology – research found that only 17% of Brits use these cameras.

Other examples of smart driving technology include:

Dash cams – due to cost and ease of use, dash cams are currently the most popular device used by drivers. Dash cams provide a 24-hour recording of the front view of your car, encouraging drivers to show greater care – as well as being invaluable for insurance claim purposes.

Collision alerts – Usually as part of a rear-view camera or vehicle sensor system, this technology functions as a prevention device. In the event of a potential collision, this system can automatically intervene by slowing down or stopping your car.

“Black boxes” – Often fitted by insurance providers in exchange for lower premiums, telematics (more commonly known as a black box) is a system which monitors how each individual drives, with the data sent to the insurance company. Despite the potential for cost saving, an overwhelming 64% of the British public would not consider using them.