HomeTributes to Suffolk Road Haulage ‘Legend’ Bob Carter. Did You See His Lorries? 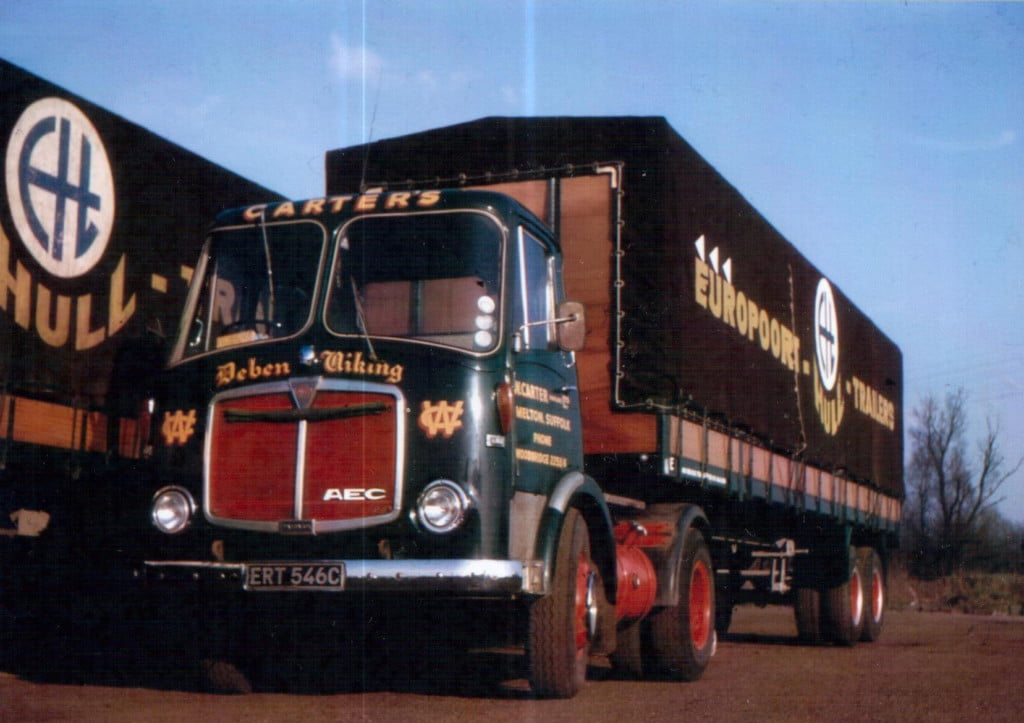 Tributes to Suffolk Road Haulage ‘Legend’ Bob Carter. Did You See His Lorries?

Here is his tribute to “a great man”.

“Bob was born on July 9, 1938 – the first of five children to Isla and Leslie Carter of Bromeswell, near Woodbridge. Les was busy running his own road haulage business. He’d set it up in 1929, calling it W Carter after his dad, William.

From the age of just five. Bob spent as much time as he could at lorry yard, helping with whatever he could. Aged 17 he joined REME (The Corps of Royal Electrical and Mechanical Engineers) to learn all about mechanical engineering – practical things he used for decades. He loved servicing equipment and fixing things.

“He travelled first in England then Germany – culminating in being stationed on Christmas Island in the Pacific. Here he witnessed atomic and hydrogen bomb tests.

“Returning to the family business on disscharge in 1959 he worked as a lorry driver and mechanic. It was hard physical work then, manually handling most loads without modern comforts like air con and power steering.”

In 1966 Bob left the family firm and took a job driving an AEC unit (Associated Equipment Company) for Seawheel at Felixstowe port.

“He became traffic manager, then depot manager. When he left in 1970 to set up on his own as a clearing house, he had become business development manager for the entire UK.

“The shipping container revolution was booming, making world trade much easier. After initially using other hauliers’ vehicles as contractors, he quickly got so busy he had to acquire his own units and trailers. The Trans UK group of companies was born.

“Most of the work was containers from Felixstowe port, with some unaccompanied ro-ro (roll on, roll off) trailer traffic. It grew annually.

“In 1975 the first overland trip to Iran was organised. Four trucks and tilt trailers completed the journey, with Bob going along to learn the job in his Humber car, accompanied by agent Colin Staydon.

“He created a manual for future drivers, to help them with details of the route. The oil-rich Middle East was booming, with the desire for western goods. Its ports could not cope with the increased freight volumes.

“The continental work continued until 1980. Unrest in Iran and Afghanistan brought about its demise. Three customers went bust on Trans UK: Seatrain Lines, Aguris Lines and Meredith & Boreham Shipping. The bank called in the overdraft and the Trans UK group ceased trading in July, 1981.

“The fleet had peaked at 43 vehicles, all named after horses. Bob had a stud called Hillenvale at Capel St Mary, where wife Sara bred horses. He also had a workshop and yard at Capel, which he acquired from Sara’s family, Page Brothers. Most of Bob’s equipment was based at Felixstowe port.

“After this Bob tried three times to run a few trucks, which was not very successful. He worked as a mechanic most of the time but had goes at double-manning European trips with John Green, importing and exporting goods and stevedoring in foreign docks.

“A triple bypass at Papworth evolved into a quadruple one during 2001. Bob developed MRSA, which slowed the recovery. He worked part-time on the Argos contract in the fleet department (working for DHL and delivering larger items to customers’ homes) until he finally retired, aged 78.

“Sadly, Bob was diagnosed with lung cancer in July, 2018. He fought a dignified battle with a nasty disease until January 10, 2019. He leaves a daughter, Janie, and two sons, Jimmy and Chas.

“It was most apt as Bob used to drive one for his dad in the early 1960s. Les’s was a 6×2 rigid flatbed. If allthe weight wasn’t stacked up at the front, sometimes it would rear up!

“I was proud to carry the coffin in with Mat Ireland and two of Bob’s ex-drivers, Eddie English and Terry Ludar-Smith. It’s a very personal goodbye. The last thing you can do.

“The wake was well attended at the Holiday Inn Ipswich – Orwell, on Ransomes Europark, where old friends and family shared memories of a great man. “Two unique scale models of Trans UK Haulage trucks were on display, along with loads of photographs, wreaths, flowers, a painting of one of Bob’s Fiats in the desert made by ex-driver Brian Wales, articles on Bob in Commercial Motor and several copies of his book You Call, We Haul.

“Mat Ireland wrote it and it was published by Old Pond in 2017, so anyone can read more details on Bob’s interesting life if desired.

“The respect for this man is massive. He will live on forever through the experiences written (about) in the book. He enjoyed all things road haulage; gardening; walking his black Labrador, Harley, on the golf course, and smoking his pipe. He adopted a stray black cat he called Mols; and, being allergic to milk, he enjoyed a black coffee.

“Meeting up with ex-employees and other friends every Wednesday for lunch became the highlight of his week over the last few years. The book project reunited a lot of people.

“Rest in peace, Mr Carter. We have lost a true pioneer of road haulage. What a journey.”

The publisher’s summary for Mat Ireland’s 2017 book You Call, We Haul: The Life and Times of Bob Carter said the haulier was never afraid to get his hands dirty.

“Bob was able to turn his hand to any aspect of his business operation, from repairing mechanical defects to operating forklifts and even, on the odd occasion, driving his own trucks.”

It added: “A real one-off and Mr Nice Guy, Bob Carter was held in high esteem and respected by one and all…”