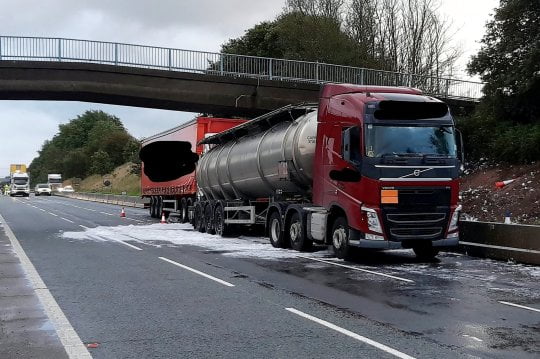 The motorway was closed off between junction 19 in Knutsford and junction 20 in Lymm, following a collision between the two vehicles at around 5:30pm.


The lorry then began leaking its cargo, some 32,000 liters of gin and Cheshire Police said the crash had caused long delays advising motorists to avoid the area. No injuries were reported. Cheshire Fire and Rescue service said that it was “working hard to stem the leak” from one of the tankers, carrying concentrated gin to be pumped into a replacement tanker. It was also coating the spilt alcohol with foam to prevent the liquid from igniting. As a precautionary measure, a 300m cordon was in place around the scene of the accident.

Those caught up in the tailbacks, despite suffering delays of two hours, managed to see the funny side of the incident with Rachel Sargeant tweeting that she was sitting “200yds away from 32,000 litres of spilt gin” joking it was “heartbreaking she didn’t have a straw”

Mr Ree 2 asked if it was in the “sloe lane” while Anthony Davies tweeted those in the traffic “just had to gin and bear it.”