HomeLife on the road as a female lorry driver 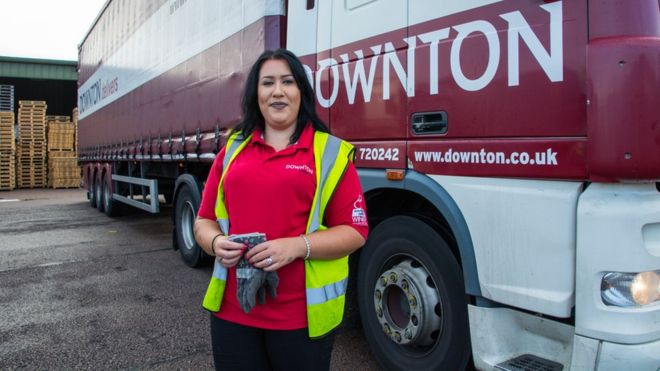 Life on the road as a female lorry driver

The haulage industry has a shortage of drivers, so the government is urging companies to encourage more women to get behind the wheel.

What’s life on the road like for a female trucker?

“I’ve never been out on a job by myself before,” says Leonie John, as she smoothly pulls her 44-tonne truck out of a tight junction.

The 22-year-old former hairdresser now works for C M Downton, a haulage company with its headquarters in Gloucester and depots around Britain.

She started her apprenticeship in February, has gained the necessary qualifications and soon she’ll be driving HGVs on her own all the time.

Leonie always wanted to be a lorry driver – she says she hates being “stuck in one place” – but she thinks at least one aspect of her former life has helped with her new one.

“When I was a hairdresser I had to keep to appointment times and not keep people waiting. Now I’m a lorry driver, I have to keep to a delivery schedule and not be late. So it was useful practice.”

MPs on the Commons Transport Select Committee have urged companies to expand their female workforce, which currently makes up just 8% of the 400,000 qualified drivers.

They also want the industry to come up with plans to attract more people from ethnic minority backgrounds.

92% of the 400,000 people holding both an LGV licence (also known as HGV) and a Driver Certificate of Professional Competence are men

It was reported in 2010 that only 3% of the road haulage workforce in England was from a Black, Asian or minority ethnic background