HomeReckless Manoeuvre In A HGV 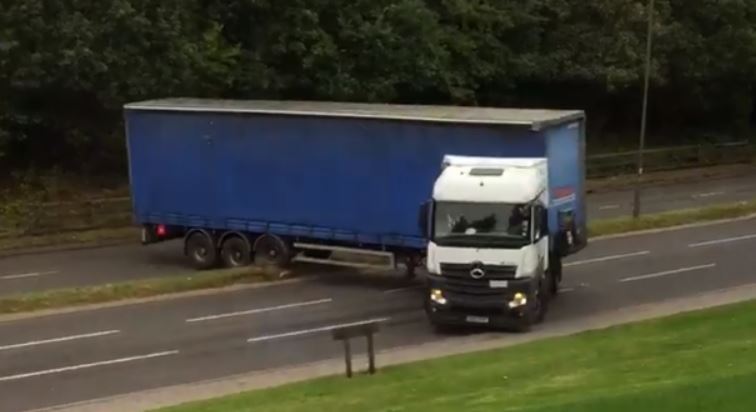 Reckless Manoeuvre In A HGV

“(He had) no regard for safety,” said witness Darren Coppe, who claimed the driver first began reversing huge vehicle down the carriageway

This lorry driver has been labelled “completely irresponsible” after being filmed completing a U-turn across a dual carriageway in Guildford.

his lorry driver has been labelled “completely irresponsible” after being filmed completing a U-turn across a dual carriageway in Guildford.

Darren Coppe, 40, from Hartley Wintney, captured the “reckless” manoeuvre on Ladymead on Monday (September 26) at around 2pm.

Mr Coppe first began filming the unusual scene – near the A3 junction – from Guildford business park. He claimed when the driver realised he was not going to get under the Wooden Bridge railway bridge, he started reversing up the dual carriageway towards Dennis roundabout.

“He did not realise his lorry was not going to get under the bridge, I think lorries have got stuck up there before, they are supposed to call police but instead he was reversing up the dual carriageway into oncoming traffic, so the traffic was coming off the roundabout and were driving up to him. I thought there would be an accident.”

The driver then decided to stop reversing and instead made a u-turn over the grass verge which divides the opposite directions of the road and drove back towards the roundabout.

Mr Coppe explained over the past three years, he has seen at least three lorry drivers misjudge the clearance of the bridge and had to call police who close off the road and help motorists back out to the roundabout and move away from the scene safely.