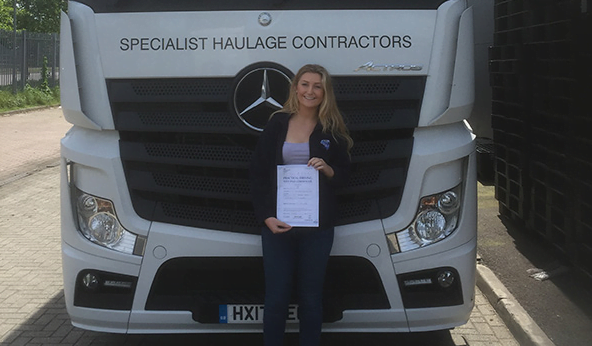 In an industry where the average age of HGV drivers is over 50, 20-year-old Katie Ellis was described as ‘a breath of fresh air’ when she received HGV training and qualified as an HGV driver.

Katie is believed to be one of the youngest women to ever achieve a class 1 license. She became the second generation of her family to fully qualify as an HGV driver. Katie joined the Prestige Distribution, based in Horsham, West Sussex which is a part of the £77 million turnover Pallet-Track network. She covers the south-east of England including night truck driving. She was described by Pallet-Track’s Managing Director as a ‘role-model’ for the new generation, for qualifying to drive a 44-tonne truck.

After she completed her A-levels, Katie’s father Steve, the founder of Prestige Distribution suggested that she goes out to learn and stand on her own feet. Thus, Katie joined a bakery and worked as an apprentice first and then as a full-time employee for over a year. At the age of 19, she received Class 2 Driver’s training and later Class 1 training. After which she joined her father’s business. Having an aptitude for driving, she is a fast learner.

The Road Haulage Association (RHA) revealed that the trucking industry needs around 50,000 new drivers. The average age of truck drivers in the UK is 53. Only 2 percent of drivers are under the age of 25. Therefore, generally, there are more drivers looking to retire than at starting their career as drivers. Out of the total number of truck drivers, females make up a meagre 1 percent.

Katie revealed that it took a while for other truckers to accept the idea of a young woman driving a huge delivery truck. Described as a ‘Trailblazer Inspiration’, she has broken the stereotypical moulds and set an example for young women to step into the trucking industry.